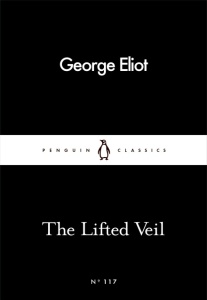 Title: The Lifted Veil
Author: George Eliot
Publisher: Penguin Books
Date: 2016 (1859)
Genre: Classics / Horror
Summary: The tale of a man who is incapacitated by visions of the future and the cacophony of overheard thoughts, and yet who can’t help trying to subvert his vividly glimpsed destiny, it is easy to read The Lifted Veil as being autobiographically revealing—of Eliot’s sensitivity to public opinion and her awareness that her days concealed behind a pseudonym were doomed to a tragic unveiling (as indeed came to pass soon after this novella’s publication). But it is easier still to read the story as the exciting and genuine precursor of a moody new form, as well as an absorbing early masterpiece of suspense.

The Lifted Veil, first published in 1859, is a novella by George Eliot which explores themes of extrasensory perception, life after death, and the power of fate. Eliot is mostly known for her realistic fiction but this novella is a notable part of the Victorian tradition of horror fiction.

I thoroughly enjoyed the plot and the major themes of this novella. Latimer, our narrator, believes that he is cursed with an otherworldly ability to see into the future and he also believes that he can read the thoughts of other people. He becomes fascinated with his brother’s fiancée, Bertha, because her mind remains closed to him. I’m not going to lie, this summary makes it sound like Twilight but I must reassure you that it isn’t. There are no sparkly vampires in The Lifted Veil. It’s a story about fate, the supernatural, and science (well, pseudoscience) which is so typical of its era but so atypical of George Eliot who never again strays into this realm of fiction.

I even liked the first-person narrative voice which is unusual for me! Eliot really gives you an insight into Latimer’s mind and it draws you into the idea of him being a psychic. Without the first-person narrative, this novella wouldn’t work at all because it depends on a reader understanding and almost believing Latimer. Unreliable narrators are one of my favourite literary tropes and Eliot really nails it in this book. I just loved it.

I definitely think that it’s worth reading, especially if you’re a fan of Victorian horror. It’s a very short story but it really does include everything you’d want and more from this genre. You can even read it for free via Project Gutenberg!

One thought on “Book Review: The Lifted Veil by George Eliot”