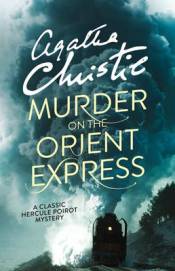 Title: Murder on the Orient Express
Author: Agatha Christie
Publisher: HarperCollins UK
Date: 2013 (1934)
Genre: Crime & Mystery
Summary: This title finds the Orient Express stopped in its tracks. The luxurious train set of with a full passenger list but by the morning there was one fewer. An American lay dead in his compartment, stabbed a dozen times, his door locked from the inside. With tension mounting, detective Hercule Poirot comes up with two solutions to the crime.

I have finally read Agatha Christie’s most famous novel: Murder on the Orient Express. Yay! I’ve never seen an adaptation so I didn’t know anything about the book before I read it – except that a murder occurs on a train.

Murder on the Orient Express has a really interesting, intricate plot. An American man, who goes by the name of Ratchett, is murdered aboard the Orient Express and Poirot, along with Monsieur Bouc, attempts to solve the crime. Little of the novel actually focuses on the crime but, instead, it focuses on how Poirot solves the crime. Most of the novel is actually taken up with individual interviews and I actually really liked this structure. It made the novel cinematic, in a way. It almost felt like I was watching a film rather than reading a book. It was fun. I also found that the structure of the book really helped me focus on what was happening. I enjoyed the solution to the novel but I did think it was a little predictable. Maybe that’s because of the structure or maybe I just guessed what the solution was. I did like how the solution was handled by Poirot though because it actually made me like him more as a character.

Unlike the other Christie novels I’ve read, I didn’t find myself drawn to any particular character in Murder on the Orient Express. The book actually felt more analytical than some of Christie’s other novels and I felt distanced from the characters and the events of the novel. It was odd, to be honest, but I didn’t dislike it.

Overall, I did enjoy reading Murder on the Orient Express. Everything about it was odd compared to the other Poirot novels I’ve read but I liked the change. I particularly enjoyed the structure of the novel. If you haven’t read it, then it is a classic crime novel and you should give it a chance.

Read as part of the Classics Club Challenge. This post does not contain affiliate links.

3 thoughts on “Book Review: Murder on the Orient Express by Agatha Christie”