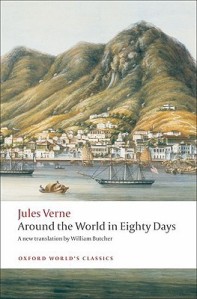 Title: Around the World in Eighty Days
Author: Jules Verne
Translator: William Butcher
Publisher: Oxford University Press
Date: 2008 (1873)
Genre: Classics / Adventure
Summary: One night in the reform club, Phileas Fogg bets his companions that he can travel across the globe in just eighty days. Breaking the well-established routine of his daily life, he immediately sets off for Dover with his astonished valet Passepartout. Passing through exotic lands and dangerous locations, they seize whatever transportation is at hand—whether train or elephant—overcoming set-backs and always racing against the clock.

Jules Verne’s Around the World in Eighty Days is a whirlwind of an adventure, depicting a race around the world but rarely stopping to explore the locations or the characters. With £20,000 at stake, Fogg could not afford to stop and explore his surroundings and that leads to a fun but almost superficial adventure. There are a few scrapes along the way which add to the sense of adventure and supply a tiny bit of tension to what is, mostly, a light-hearted and witty novel.

Everything about this novel is fluid and agile. I particularly enjoyed the writing style (which can be attributed to both Verne and the translator) because it suits the topic of the novel. The book races forward just as quickly as Fogg travels around the globe, never stopping to indulge in trivial description or indulging in flowery prose, and the humour in the writing really adds a sense of joy to the book. Fogg may only be travelling around the world to prove a point – and win £20,000 (which is about £2,250,000 today) – but he’s also on the adventure of a lifetime, travelling around the globe by any means possible and getting to know people and places he would never have known.

One thing that may make readers uncomfortable is the sheer amount of stereotyping that goes on in the book. Verne really indulges in racial stereotyping, especially of Indian, Chinese, and Native American people (specifically the Sioux), but he also relies upon stereotypes about white European people too. These racial stereotypes are typical of the time in which Verne was writing but it strikes me as odd that most of the characters in the book are flat, lacking any distinct characterisation or personality. This is even true of Fogg at times and I think the only character with a true sense of personality is Passepartout.

Overall, I thought that this was a very fun book to read! Its superficiality is joyful in a way that I didn’t expect and I thoroughly enjoyed travelling with Fogg and his companions around the world.

This post contains affiliate links which are clearly marked with an asterisk. I will receive a small commission for purchases made through these links at no extra cost to you.

7 thoughts on “Book Review: Around the World in Eighty Days by Jules Verne”