This post focuses on just a few women who wrote Gothic fiction in English in the eighteenth century but I’ll be looking at other Gothic writers in another post later in the month so look forward to that!

Clara Reeve is probably best known for writing The Old English Baron (which I reviewed here) and, while this book will be the main focus of this section, I think it’s important to note that she also wrote an innovative history of prose fiction, The Progress of Romance (1785).1 She also translated Latin texts, which was an unusual language for a woman to learn in eighteenth-century Britain, and her first published work – The Phoenix (1772) – was a translation of Argenis by John Barclay.

The Old English Baron (1778), originally published anonymously as The Champion of Virtue in 1777, was written in response to Horace Walpole’s The Castle of Otranto (1764). The novel is set in medieval England – specifically during the reign of Henry VI – and follows the adventures of Sir Philip Harclay who returns to England and discovers that his friend has died. However, all is not as it seems.

In the preface, Reeve stated that:

This Story is the literary offspring of The Castle of Otranto, written upon the same plan, with a design to unite the most attractive and interesting circumstances of the ancient Romance and modern Novel, at the same time it assumes a character and manner of its own, that differs from both; it is distinguished by the appellation of a Gothic Story, being a picture of Gothic times and manners.2 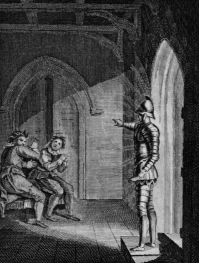 Reeve attempted to make the Gothic genre, specifically Walpole’s tale, fit with the ideals and preferences of eighteenth-century Britain, balancing fantastical elements with eighteenth-century realism, and E. J. Clery describes the novel as a “rewriting of Otranto as Pamela in fancy-dress with a spice of the paranormal, an illustrative conduct-book for the proper correlation of wealth and virtue”.3 The Old English Baron is an almost sanitised version of the Gothic, wholly un-Gothic in places but attempting to cling onto the trendiness of Walpole’s new genre. Despite these un-Gothic traits, The Old English Baron was a major influence on the development of Gothic fiction and Reeve’s contributions to the genre can generally be seen in the ways that she diverted from Walpole’s original tale.

Perhaps Reeve’s most important contribution to the genre was her attempt to find an appropriate formula that would ensure that Gothic fiction is believable and coherent. This is where Reeve differed so greatly from Walpole. Instead of revelling in the excess of Walpole’s Gothic novel, with its gigantic helmets and a skeleton ghost in a hermit’s cowl, Reeve focused on emotional realism in order to keep her novel within the realm of what was probable. In a letter to Rev. William Mason in 1778, Walpole stated that The Old English Baron was “so probable, that any trial for murder at the Old Bailey would make a more interesting story,” ridiculing the concept of a probable ghost-story.4 I doubt that Reeve cared what Walpole thought of her Gothic novel but the seemed annoyed by the comparisons that reviewers made between the two.

Ultimately, Reeve did not want the Gothic genre to fall into the realm of the absurd and her influence can be seen in the writing of Ann Radcliffe.

Ann Radcliffe was the most popular writer of her day and Nathan Drake even called her “the Shakespeare of romance-writers”.5 High praise indeed considering that Bardolatry was alive and well by this point. Radcliffe’s novels were all best-sellers but, along with most novels at the time, they were looked down upon by those who thought themselves ‘well-educated’ as they were considered sensationalist nonsense.

Firstly, I’m just going to list Radcliffe’s novels because I’ll not be able to talk about all of them in detail in this post:

The Mysteries of Udolpho is perhaps Radcliffe’s most famous novel but I actually prefer The Romance of the Forest and The Italian. We’re all allowed to have opinions.

Radcliffe developed the explained supernatural – which just means that every seemingly supernatural intrusion is eventually traced back to natural causes. This is also an element of what scholars (sometimes) refer to as the ‘female Gothic’. I’d say that this is an outdated term because the ‘female Gothic’ is notoriously difficult to define and it is not simply the body of Gothic literature written by women – although that is what Dr Ellen Moers originally intended the term to mean – but it is still used to describe certain types of Gothic literature. Radcliffe’s novels differ from those of Horace Walpole and Matthew Lewis, both of whom indulged in the supernatural, and her attempts to make Gothic more respectable (by removing the truly supernatural aspects of the genre) led to her work being considered a different form of Gothic literature. Radcliffe’s The Italian is actually a response to Matthew Lewis’ The Monk (which was inspired by The Mysteries of Udolpho) and if you compare the two novels then you can clearly see the differences between Radcliffe’s work and Lewis’.

One of Radcliffe’s talents was creating a sense of the sublime through the visual elements of her work, allowing readers to feel the same terror as the characters. Radcliffe considered the sublime to be the biggest motivator of her heroines and heroes. Sublime experiences of nature were cleverly woven into her plots to create a sense of pleasing terror. I think this is perhaps most evident in The Mysteries of Udolpho and this section from volume two, chapter five demonstrates the sublime perfectly:

Emily gazed with melancholy awe upon the castle, which she understood to be Montoni’s; for, though it was now lighted up by the setting sun, the gothic greatness of its features, and its mouldering walls of dark grey stone, rendered it a gloomy and sublime object. As she gazed, the light died away on its walls, leaving a melancholy purple tint, which spread deeper and deeper, as the thin vapour crept up the mountain, while the battlements above were still tipped with splendour. From those, too, the rays soon faded, and the whole edifice was invested with the solemn duskiness of evening. Silent, lonely, and sublime, it seemed to stand the sovereign of the scene, and to frown defiance on all, who dared to invade its solitary reign. As the twilight deepened, its features became more awful in obscurity, and Emily continued to gaze, till its clustering towers were alone seen, rising over the tops of the woods, beneath whose thick shade the carriages soon after began to ascend.6

I honestly don’t think that there was another Gothic writer that could capture the sublime of nature in the way that Radcliffe did. She was a master at her craft.

Radcliffe was also influential for later writers. Matthew Lewis and the Marquis de Sade produced more violent works of Gothic literature but they were clearly inspired by Radcliffe. There was even the ‘Radcliffe School’, a collection of imitators such as Harriet Lee and Catherine Cuthbertson, and Jane Austen famously parodied The Mysteries of Udolpho in Northanger Abbey. I’d argue that Austen’s parody is born out of a love for, and an understanding of, Radcliffe’s work because she clearly read her novels to parody them so well in Northanger.

Without Ann Radcliffe, Gothic literature would not be what it is today.

Parsons turned to Gothic writing because the genre was incredibly popular in the 1790s and, although critics often claimed her works were ill-written and disorganised, her novels were influential. Parsons was best known for writing The Castle of Wolfenbach (1793) and The Mysterious Warning (1796), two of the seven Gothic titles (also known as the Horrid Novels) that are recommended by a character in Jane Austen’s novel Northanger Abbey.7 Both were published by the Minerva Press, a publishing house that specialised in sentimental and Gothic fiction.

The Castle of Wolfenbach is an early work in the genre, predating Ann Radcliffe’s The Mysteries of Udolpho and Monk Lewis’ The Monk (a novel that I should write a post about in the future but March is Women’s History Month so not this month), and it’s a very typical Gothic novel which features tropes such as the damsel in distress, gloomy Gothic architecture, the discovery of scandalous family secrets, and a final confrontation between forces of good and evil. It is rather anti-Catholic, as many Gothic novels were, and it features a pro–English Protestant sentiment. Many early Gothic novels were anti-Catholic. It was usually a reaction to the Roman Catholic Relief Act of 1791 and other Catholic emancipation movements in Britain at the time. This novel tends to lean towards the ‘female Gothic’ characteristics that can be found in Radcliffe’s work as the heroine tricks her way into an inheritance while pretending to be vulnerable and innocent. (I really hate the term ‘female Gothic’ but I just have to deal with it.) However, it does feature a villain with incestuous intentions and some rather explicitly violent scenes. It’s a good read. 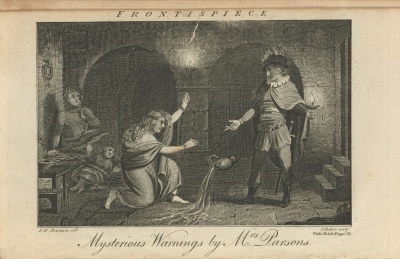 Parsons wrote Gothic novels that were brimming with Gothic tropes. If you can think of a Gothic trope then it’s probably in one of these two novels. I know that Parsons got into the genre because it was a lucrative opportunity for her but she certainly understood the Gothic genre and its formula. Parsons may not have been as influential or as experimental as Radcliffe (or even Reeve) but she knew how to write a thrilling Gothic story.

That’s it! I really enjoyed researching and writing this post about three early Gothic writers – who just happen to be women – and what better way to start my Women’s History Month posts than by celebrating the women that played a role in the development of early Gothic literature.

If you enjoyed this post or found it interesting then please consider buying me a coffee or, if you’re interested in any of the books I’ve talked about in this post, check out my bookshop.org* list which features all of the books I’ll be talking about during Women’s History Month!

This post contains affiliate links which are clearly marked with an asterisk. I will receive a small commission for purchases made through these links at no extra cost to you.