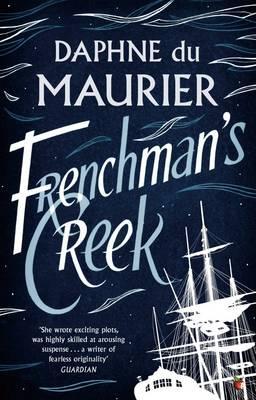 Title: Frenchman’s Creek
Author: Daphne du Maurier
Publisher: Virago Modern Classics
Date: 2015 (1941)
Genre: Historical Fiction / Classics
Summary: Lady Dona St Columb seems to revel in scandal; she is involved in every intrigue of the Restoration Court. But secretly, the shallowness of Court life disgusts her, and in her heart she longs for freedom and honest love. Retreating to Navron, her husband’s Cornish estate, she seeks peace and solitude away from London. But Navron is being used as the base for a French pirate, an outlaw hunted by all Cornwall. Instead of feeling fear, Dona’s thirst for adventure has never been more aroused; in Jean-Benoit Aubéry she finds a sensitive man who would, like her, gamble his life for a moment’s joy. Together they embark upon a quest rife with danger and glory, one which will force Dona to make the ultimate choice; will she sacrifice her lover to certain death, or risk her own life to save him?

Read as part of the Classics Club Challenge

I will admit that I’m not a huge fan of historical novels (although I do seem to read a lot of them these days) but I enjoyed reading Frenchman’s Creek much more than I expected to and that’s because it was just so entertaining.

The novel is set in Restoration England and this is mainly expressed through the fashion of the upper-classes and references to the King. Everything else just felt very vague and the novel, especially when the actual story began to develop, was more focused on the action rather than accurately representing a time period. I didn’t care that it was set in the Restoration era and I wasn’t yearning for more references to that. I can’t even tell you which King is involved in the story. Charles II? James II? Who knows. I just cared about the pirate.

I thought that the plot was fun! It was an enjoyable story about love, adventure, and the overwhelming urge to escape normal life. Dona has been yearning for more in her life, indulging in dangerous acts in London just so that she can feel something, and this leads her to moving to Cornwall with her children. She leaves her boring, doltish husband in London while she embarks upon a new life. In Cornwall, she is no longer restrained by the trappings of courtly life (although the nobles of the surrounding villages make themselves known at every occasion possible) and she begins to enjoy life more. Her life becomes even more thrilling when she stumbles upon a pirate hiding in a creek near her property. Jean-Benoit Aubéry is everything you’d want from a pirate: honest, daring, and sensitive. He ignites Dona’s thirst for adventure and, through his guidance, she begins to live life to the fullest.

I liked Dona as a main character. She was insufferable in the first couple of chapters and I was well on my way to hating her but I was able to empathise with her desires and actions as the novel progressed. She’s clearly restrained by her social class and by her gender, unable to act in the way that she wants to due to the expectations of others, and it was joyful to watch her blossom into the best version of herself. Aubéry is wish-fulfilment in the guise of a pirate and William was a wonderful supporting character. Many of the other characters, especially the nobles of Cornwall, were caricatures and I didn’t mind that. I love a good book that mocks the upper-classes for their greed and hypocrisy. I, too, would have wanted to steal one of their wigs.

There was a lightness to the tone of the novel, especially in the middle of the story, and I loved that. Reading the book was an almost cinematic experience and I think, in part, that was facilitated by the light and shade within the story as the plot swung between peaceful fishing scenes and high-tension moments where everything threatened to fall apart around Dona. I found the novel to be well-paced and the ending was perfect.

Overall, I really enjoyed this book and I would definitely recommend it. Just don’t expect it to be anything like any of the other books you’ve read by Daphne du Maurier.

This post contains affiliate links that are clearly marked with an asterisk (*) – I will receive a small commission for purchases made through these links at no extra cost to you.